On the dark and rainy evening of Monday 9th December, Eskom, South Africa's beleaguered power utility, announced Stage 6 load shedding would be implemented with immediate effect. This after two weeks of Stage 2 and Stage 4 load shedding . The struggling power utility ordered stage 6 rotational power cuts as it continued to battle capacity constraints caused by flooding and unplanned outages. Instituting stage 6 load shedding means that Eskom was without at least 40% of its generating capacity.

Eskom attributes the rapid shift to stage 6 load shedding to unexpected flooding due to heavy rain fall which has effected infrastructure and coal supplies. This has put extra strain on an power system that was already short of capacity due to other unplanned breakdowns.

Stage 6 load shedding means shedding 6000 MW. It is an indication that Eskom has lost over 40% of its generating capacity. Residence will experience more frequent black outs for up to four and a half hours at a time.

Stage 6 to Stage 8 load shedding schedules are not yet publicly available and there is much uncertainty about when the outages will occur and for how long. the EskomSePush app remains the most reliable source of load shedding times and schedules. The app is in the process of adding the new information.

Johannesburg and Pretoria have also experienced higher than usual rainfall continuously for more than 7 days, resulting in flooding and road closures in some areas. cellular communication towers have solar powered battery backups which have been unable top recharge sufficiently due to lack of adequate sunlight, meaning that the mobile communication network is also under strain and communication is unreliable.

Traffic congestion is worsened by both the heavy rain and sporadically functioning traffic lights. Visibility at night is problematic with limited lighting and mist. Motorists are urged to be extremely cautious as the combination of factors creates dangerous driving conditions.

Residents can try to plan around scheduled outages, ensuring that devices are charged, planning meals accordingly, and having sufficient battery lighting available, leaving earlier or later to avoid peak traffic. Purchasing an inverter may also be an option. Stand alone units are available at Builders Warehouse. If you wish to get an inverter 'wired-into the mains' an electrician will be required as well as permission form the landlord.

Many South African's and visitors will be rethinking their Christmas menu, which will likely include a braai (outdoor barbecue) rather than the traditional roast dinner, and will almost certainly be a candle-lit affair! 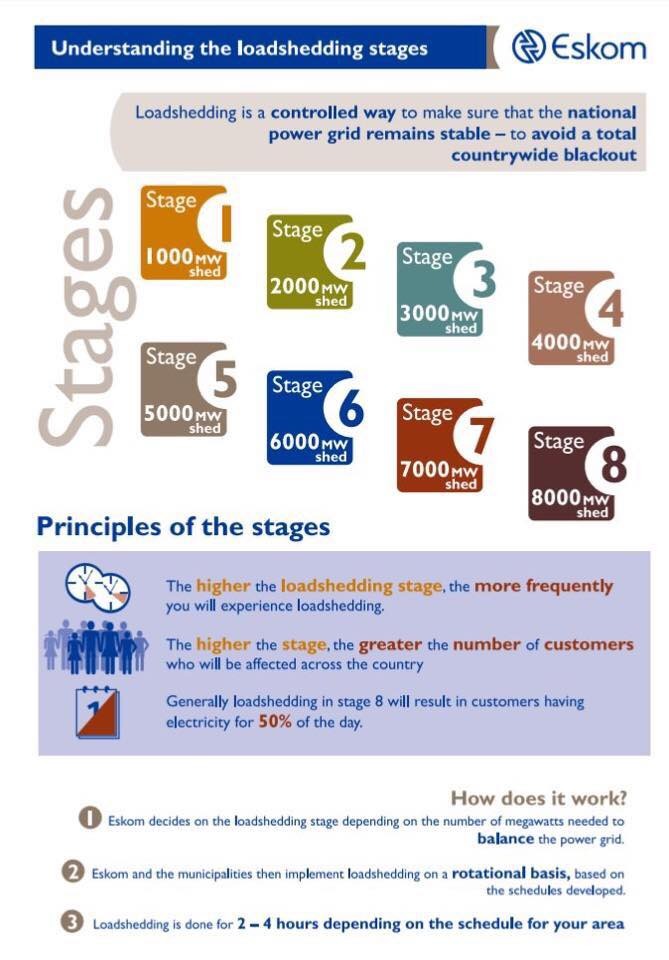 This is how we do the Holidays